Diet is a very essential part of the treatment of your H. Pylori infection. Certain foods can help your H. Pylori gastritis, while other foods may worsen your condition.

Today we will share a list of foods to avoid H. Pylori infection [Based on scientific evidence]. Avoid the foods below completely or at least consume them moderately. We also included some alternatives for you to eat instead. Summary of foods to avoid with H. Pylori gastritis

1– Caffeine (the most important food to avoid with H Pylori Infection).

Caffeine is famous for inducing gastric upset. You must avoid caffeine with H. pylori gastritis or limit its consumption.

Caffeine can induce gastritis by Increasing acid production inside your stomach. This can worsen Helicobacter Pylori infection and gastritis [ref].

Some fruits are highly acidic, most importantly citrus fruits. You must avoid these fruits with H. Pylori infection as they add acidity to your stomach and worsen gastritis.

However, these citrus fruits contain a high amount of Vitamin C, which is thought protective against H. Pylori [ref].

Vitamin C is very important for your immunity against H. Pylori, and cutting citrus fruits completely may not help to eradicate H. pylori. This 2018 review article concluded that including vitamin c (ascorbic acid, or ascorbate) may help H. pylori eradication, especially with antibiotic-resistant H. Pylori.

Citrus fruits are acidic in nature, and eating too much of them can be problematic if you have h pylori infection. Lemon is the most “acidic” food to avoid. But oranges can be consumed in small amounts with caution.

Beneficial fruits to eat instead:

Fatty foods should be avoided with H. pylori gastritis as they:

Examples of fatty foods to avoid with H pylori:

Spices and spicy food can aggravate H. Pylori gastritis as they:

This 2011 study found a strong link between soft drinks and h pylori gastritis. Consumers of soft drinks presented 63% of the H.pylori positive group versus only 23% of the H. pylori-negative group. Examples of soft drinks to avoid with H pylori infection:

The role of alcohol and whether to avoid it or not is still uncertain.

However, the same meta-analysis found that larger doses may aggravate the condition (Dose-related U-shaped relationship). 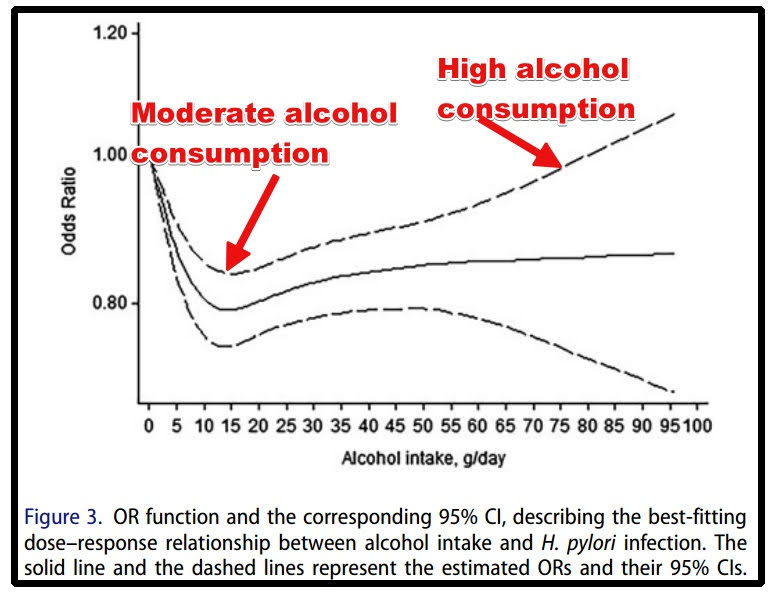 On the other hand, alcohol(especially wine and beer) was found to increase the amount of stomach acid, leading to the triggering of H. Pylori gastritis symptoms [ref]

We think it is better to avoid alcoholic beverages, especially if you are already taking the H. Pylori eradication Medications or have already eradicated it.

Another type of food to avoid with H. Pylori is tomatoes and their products. Because of its acidity, it may trigger gastritis and worsen your condition.

Try to restrict tomatoes and tomato products to as much as you can. Examples include:

Some other foods and drinks are acidic. Acidic foods should be avoided with h pylori gastritis as they increase the symptoms.

However, consumption of onion and garlic (especially the raw form) is linked to the triggering of gastritis and GERD [ref].

So, regarding the uncertainty about its role in H. Pylori infection, we recommend a trial and error approach. Keep a food diary and check symptoms after consumption of onion or garlic. If there is an increase in gastritis symptoms, you should avoid eating them.

Some medications are known to induce gastritis. Taking them with H. pylori infection can cause further damage.

If you are suffering from H. Pylori gastritis. Always consult your doctor about any medication you currently use or plan to use.

Examples of medications to avoid with H. Pylori infection:

[HINT: You can use a safer alternative such as Paracetamol]

More:
What to Expect After H. Pylori Treatment? Gastroenterologist Explains.