Irritable bowel syndrome is a functional bowel disease. No obvious cause or lesions can be detected in IBS and this is why it is called (functional).

IBS is a widespread condition affecting about 10-15% of people worldwide. IBS causes attacks of abdominal pain during which your stomach keeps gurgling.

Also, IBS is linked to chronic fatigue and chronic pain syndromes such as fibromyalgia, and that’s why IBS may make you feel sick during the attacks (reference).

According to ROME IV criteria for IBS diagnosis, IBS is considered when: 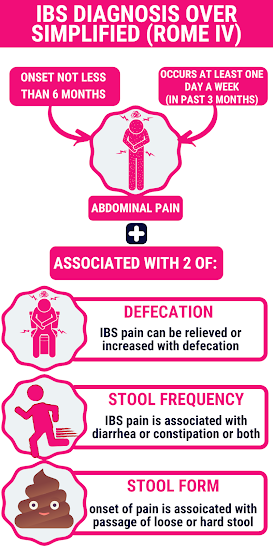 Food intolerance is a difficulty digesting certain types of food. The most widespread type of lactose intolerance (lactose is a sugar found in milk and dairy products).

The intolerance often results in a deficiency of a defect in the digestion or absorption of certain types of food or food constituents. As a result, food accumulates inside your digestive systems and causes symptoms as stomach gurgling and sick feeling.

The allergy is an immune-mediated response to a food that can cause more severe symptoms. The symptoms of food allergy are not confined to your gut. Extra-intestinal allergic conditions such as skin rashes also develop.

Consult your doctor or dietitian if your stomach keeps gurgling or you feel sick after consuming certain types of foods or drinks.

The summary and differences between food intolerance and food allergy are in the table below:

RELATED: What happens if you ignore lactose intolerance.

Dumping syndrome is often a side effect of previous abdominal surgeries such as:

Stomach dumping is a rapid emptying of your stomach (often due to decreased stomach capacity).

The rapid emptying results in rapid movement of stomach content into your intestine producing:

We are discussing the causes of chronic abdominal pain and diarrhea. Acute diarrhea and abdominal pain are almost exclusively caused by infection and food-borne illnesses (food poisoning).

However, infections can also lead to chronic diarrhea and abdominal pain.

Common causes of chronic gastrointestinal infections that lead to diarrhea and stomach pain:

Your doctor will require some tests to diagnose the cause of infections. Commonly, stool analysis and stool culture.

Celiac disease is considered a form of food allergy. It affects about 1% of the people. Celiac disease is an immune-mediated reaction to a protein found in wheat, rye, and barely called (gluten).

Gluten protein causes a destruction in the lining cells of your intestine that are responsible for food absorption. The destruction leads to symptoms as: