What you need to know.

Miralax works for fecal impaction only after the dis-impaction using mineral oil enema or manual impaction. Using MiraLax before removing the impacted stool mass might not work and may cause worsening of the condition.

You can use MiraLax (PEG) in cases of severe constipation (without impaction) or early mild stool impaction.

However, vomiting, severe abdominal distension, and abdominal colics can complicate the early use of MiraLax in severe cases of impaction (with a large hard stool mass in theirectum).

Either way, You have to consult your doctor. Fecal impaction is a serious medical condition. The trial to disimpact stool by yourself may lead to failure or complications.

The decision to use MiraLax depends on the confirmation of your condition. It is important to know the difference between severe constipation and fecal impaction.

Stool impaction is difficult to diagnose.

Stool impaction can be easily overlooked by both patients and doctors. Early diagnosis of stool impaction helps easier dis-impaction.

Early-stage stool impaction is similar to severe constipation in symptoms. Only your doctor can know the difference by:

The most important step before using Miralax for impacted stool.

Treatment of stool impaction must pass in these 3 steps in order (reference). 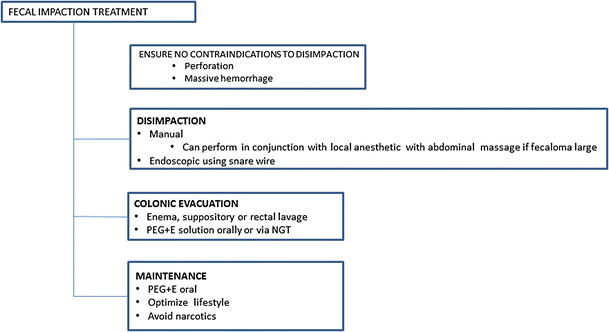 In severe cases of stool impaction, MiraLax cannot be used as the first step of treatment.

Your doctor or nurse has to disimpact the hard stool mass at first (either by gloved finger or by special tools). Then, MiraLax can be given to help evacuate the remnants of stool inside the colon.

Don’t try to use higher doses of MiraLax for stool impaction without medical supervision.

The dose and the method of MiraLax for Fecal impaction.

After disimpaction of the stool mass, a large dose of MiraLax (polyethylene glycol) should be given.

Use MiraLax as directed by your doctor or as follows (reference):

What to do if MiraLax fails to work for impacted stool?

The first step after manual or endoscopic disimpaction of the stool is to identify the cause of constipation.

Then, treatment of this underlying cause and the use of laxatives (as MiraLax®) to evacuate the colon and to prevent a recurrence.

In certain cases, the cause may be severe (such as neurological diseases and structures). This may cause MiraLax® to fail in restoring bowel movements.

Consult your doctor if MiraLax doesn’t Produce bowel movements for 3 days or more. Your doctor will:

The Dose of MiraLax for severe constipation.

My poop is too big to come out and it hurts: What to do? How to relax sphincter muscles for constipation (Dr. Farahat).